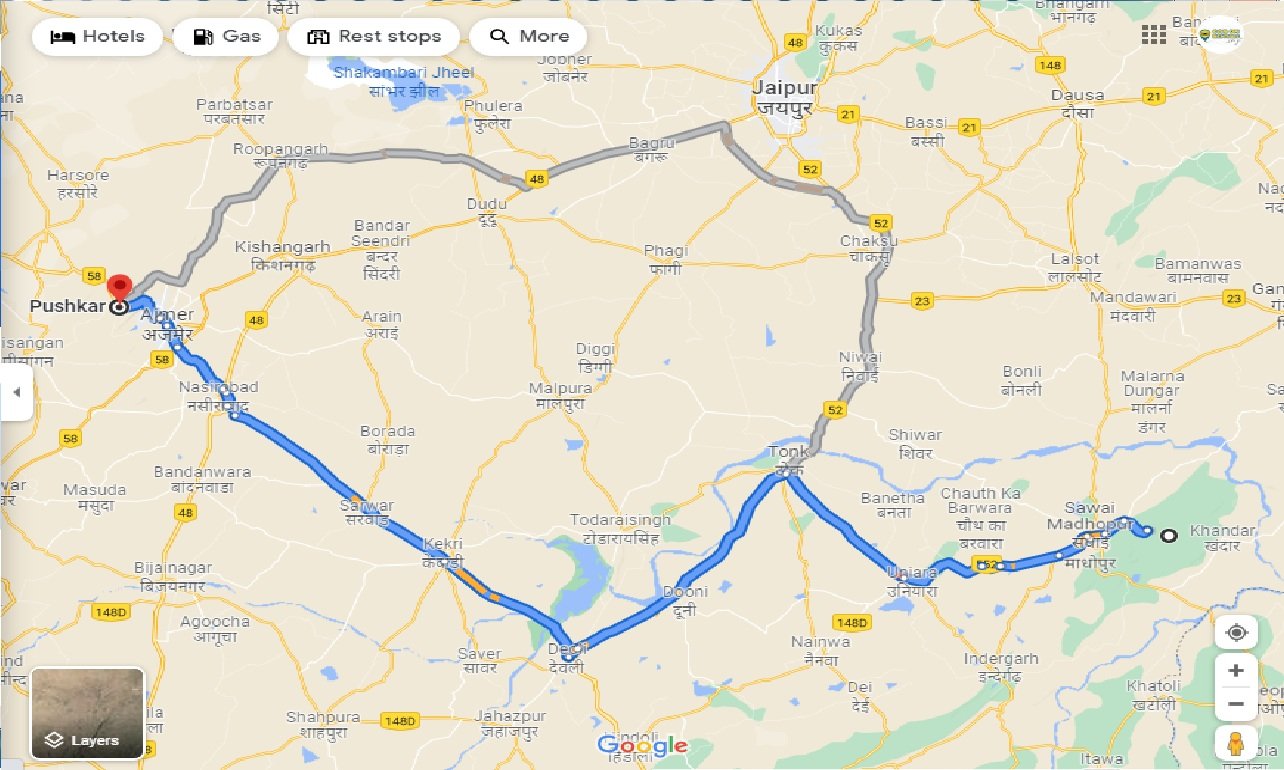 Hire Cab from Ranthambore To Pushkar Round Trip

Book Ranthambore To Pushkar cab, compare Car fares & check for online discounts & deals on Ranthambore To Pushkar taxi Service. Clean Cars, No Extra Charges. 8888807783. Ranthambore National Park is a vast wildlife reserve near the town of Sawai Madhopur in Rajasthan, northern India. It is a former royal hunting ground and home to tigers, leopards and marsh crocodiles. Its landmarks include the imposing 10th-century Ranthambore Fort, on a hilltop, and the Ganesh Mandir temple. Also in the park, Padam Talao Lake is known for its abundance of water lilies.

Pushkar is a town bordering the Thar Desert, in the northeastern Indian state of Rajasthan. It's set on Pushkar Lake, a sacred Hindu site with 52 ghats (stone staircases) where pilgrims bathe. The town has hundreds of temples, including 14th-century Jagatpita Brahma Mandir, dedicated to the god of creation, which has a distinctive red spire and walls inlaid with pilgrimsâ€™ silver coins.

Distance and time for travel between Ranthambore To Pushkar cab distance

Spots to Visit in Pushkar

When renting a car for rent car for Ranthambore To Pushkar, its best to book at least 1-2 weeks ahead so you can get the best prices for a quality service. Last minute rentals are always expensive and there is a high chance that service would be compromised as even the taxi provider is limited to whatever vehicle is available at their disposal.

The winter season of October to March is the best time to visit Pushkar when the pleasant weather makes sightseeing and shopping, conducive activities. The temperatures at this time range between 8 Â°C - 22 Â°C. Pushkar is flocked by devotes and tourists at this time.

Ranthambore To Pushkar Round Trip Taxi

Why should we go with car on rentals for Ranthambore To Pushkar by car book?

When you rent a car from Ranthambore To Pushkar taxi services, we'll help you pick from a range of car rental options in Ranthambore . Whether you're looking for budget cars, comfortable cars, large cars or a luxury car for your trip- we have it all.We also provide Tempo Travelers for large groups. Ranthambore To Pushkar car hire,You can choose between an Indica, Sedan, Innova or luxury cars like Corolla or Mercedes depending on the duration of your trip and group size.