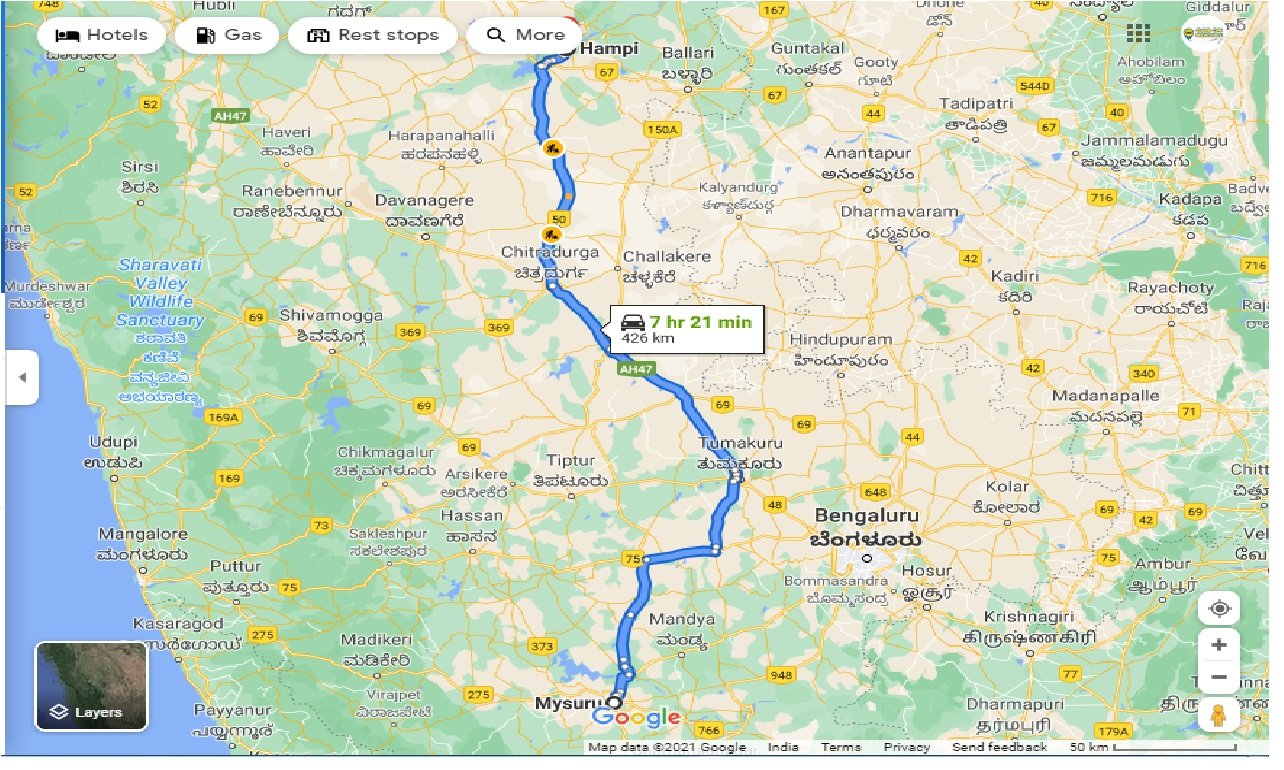 Hire Cab from Mysore To Hampi Round Trip

Book Mysore To Hampi cab, compare Car fares & check for online discounts & deals on Mysore To Hampi taxi Service. Clean Cars, No Extra Charges. 8888807783. Mysore (or Mysuru), a city in India's southwestern Karnataka state, was the capital of the Kingdom of Mysore from 1399 to 1947. In its center is opulent Mysore Palace, seat of the former ruling Wodeyar dynasty. The palace blends Hindu, Islamic, Gothic and Rajput styles. Mysore is also home to the centuries-old Devaraja Market, filled with spices, silk and sandalwood.

Hampi is an ancient village in the south Indian state of Karnataka. Itâ€™s dotted with numerous ruined temple complexes from the Vijayanagara Empire. On the south bank of the River Tungabhadra is the 7th-century Hindu Virupaksha Temple, near the revived Hampi Bazaar. A carved stone chariot stands in front of the huge Vittala Temple site. Southeast of Hampi, Daroji Bear Sanctuary is home to the Indian sloth bear.

Distance and time for travel between Mysore To Hampi cab distance

Distance between Mysore To Hampi is 436.5 km by Road along with an aerial distance. The Distance can be covered in about 08 hours 05 minutes by Mysore To Hampi cab. Your Hampi travel time may vary due to your bus speed, train speed or depending upon the vehicle you use.

Spots to Visit in Hampi

When renting a car for rent car for Mysore To Hampi, its best to book at least 1-2 weeks ahead so you can get the best prices for a quality service. Last minute rentals are always expensive and there is a high chance that service would be compromised as even the taxi provider is limited to whatever vehicle is available at their disposal.

Best Time To Visit Hampi. The best time to visit Hampi, Karnataka , is during the months of October to March, when the climate is quite cool and pleasant for outdoor sightseeing. Tourism is at its boom during this season.

Mysore To Hampi Round Trip Taxi

Why should we go with car on rentals for Mysore To Hampi by car book?

When you rent a car from Mysore To Hampi taxi services, we'll help you pick from a range of car rental options in Mysore . Whether you're looking for budget cars, comfortable cars, large cars or a luxury car for your trip- we have it all.We also provide Tempo Travelers for large groups. Mysore To Hampi car hire,You can choose between an Indica, Sedan, Innova or luxury cars like Corolla or Mercedes depending on the duration of your trip and group size.