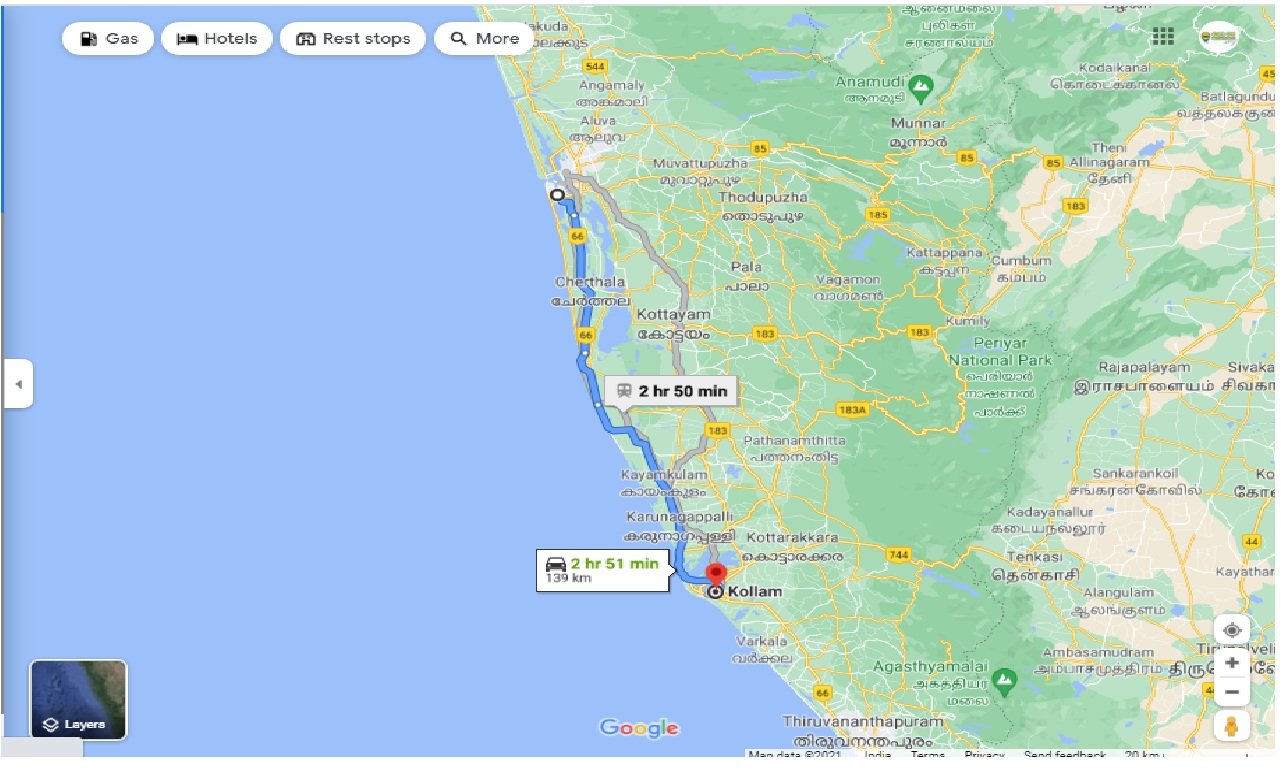 Hire Cab from Kochi To Kollam Round Trip

Kochi To Kollam cab, compare Car fares & check for online discounts & deals on Kochi To Kollam taxi Service. Clean Cars, No Extra Charges. Call 8888807783. Kochi (also known as Cochin) is a city in southwest India's coastal Kerala state. It has been a port since 1341, when a flood carved out its harbor and opened it to Arab, Chinese and European merchants. Sites reflecting those influences include Fort Kochi, a settlement with tiled colonial bungalows and diverse houses of worship. Cantilevered Chinese fishing nets, typical of Kochi, have been in use for centuries.

Kollam is a city in the state of Kerala, on India's Malabar Coast. Itâ€™s known as a trade hub and for its beaches, like lively Kollam and secluded Thirumullavaram. Sardar Vallabhbhai Patel Police Museum has artifacts tracing the history of the police force. Nearby, Ashtamudi Lake is a gateway to the Kerala backwaters, a network of waterways rich with vegetation. The striped 1902 Tangasseri Lighthouse has ocean views.

Distance and time for travel between Kochi To Kollam cab distance

Distance between Kochi To Kollam is 140.2 km by Road Kollam with an aerial distance. The Distance can be covered in about 03 hours 10 minutes by Kochi To Kollam cab. Your Kollam travel time may vary due to your bus speed, train speed or depending upon the vehicle you use.

Spots to Visit in Kollam

When renting a car for rent car for Kochi To Kollam, its best to book at least 1-2 weeks ahead so you can get the best prices for a quality service. Last minute rentals are always expensive and there is a high chance that service would be compromised as even the taxi provider is limited to whatever vehicle is available at their disposal.

Kochi To Kollam Round Trip Taxi

Why should we go with car on rentals for Kochi To Kollam by car book?

When you rent a car from Kochi To Kollam taxi services, we'll help you pick from a range of car rental options in Kochi . Whether you're looking for budget cars, comfortable cars, large cars or a luxury car for your trip- we have it all.We also provide Tempo Travelers for large groups. Kochi To Kollam car hire,You can choose between an Indica, Sedan, Innova or luxury cars like Corolla or Mercedes depending on the duration of your trip and group size.