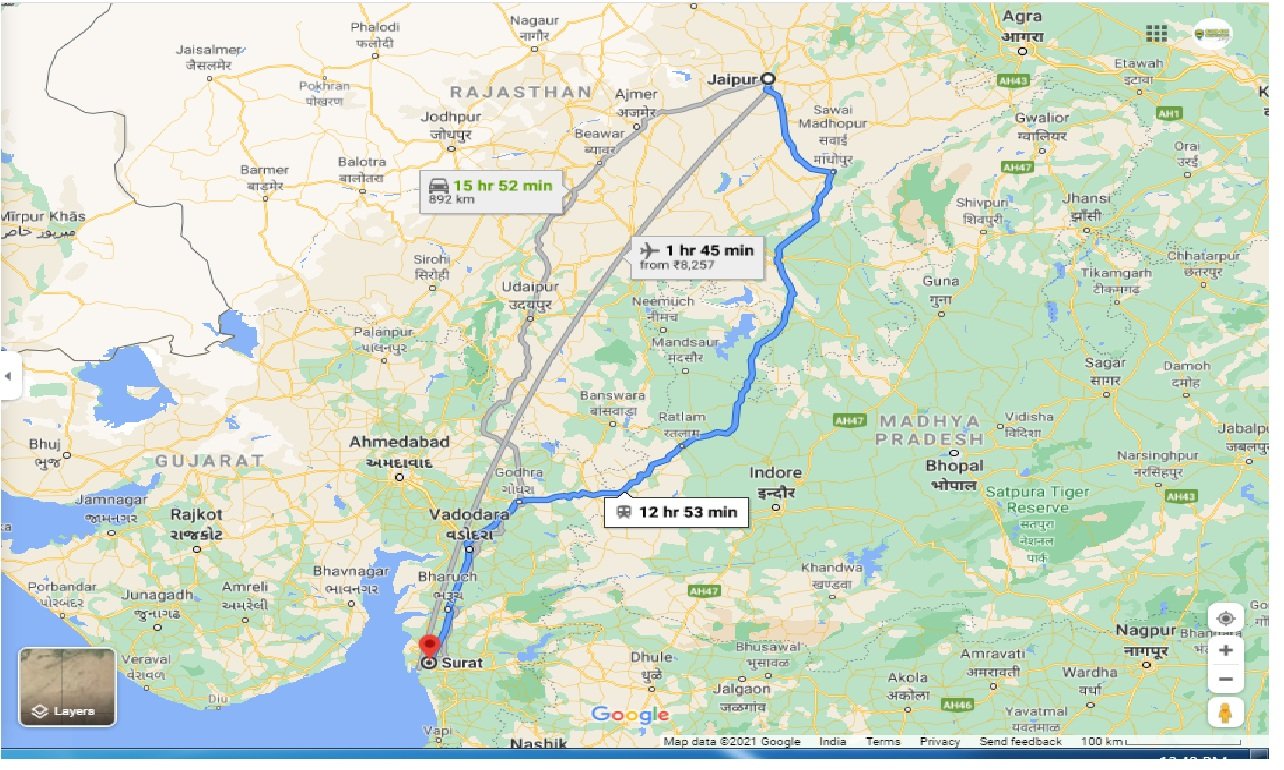 Hire Cab from Jaipur To Surat Round Trip

Jaipur To Surat cab, compare Car fares & check for online discounts & deals on Jaipur To Surat taxi Service. Clean Cars, No Extra Charges. Call 8888807783. Jaipur is the capital of Indiaâ€™s Rajasthan state. It evokes the royal family that once ruled the region and that, in 1727, founded what is now called the Old City, or â€œPink Cityâ€ for its trademark building color. At the center of its stately street grid (notable in India) stands the opulent, colonnaded City Palace complex. With gardens, courtyards and museums, part of it is still a royal residence.

Surat is a large city beside the Tapi River in the west Indian state of Gujarat. Once known for silk weaving, Surat remains a commercial center for textiles, and the New Textile Market area is lined with fabric shops. Overlooking the river, Surat Castle was built in the 1500s to defend the city against Portuguese colonists. Nearby, the Dutch, Armenian and English cemeteries contain elaborate colonial-era tombs.

Distance and time for travel between Jaipur To Surat cab distance

Distance between Jaipur To Surat is 880.2 km by Road Surat with an aerial distance. The Distance can be covered in about 15 hours 50 minutes by Jaipur To Surat cab. Your Surat travel time may vary due to your bus speed, train speed or depending upon the vehicle you use.

Spots to Visit in Surat

When renting a car for rent car for Jaipur To Surat, its best to book at least 1-2 weeks ahead so you can get the best prices for a quality service. Last minute rentals are always expensive and there is a high chance that service would be compromised as even the taxi provider is limited to whatever vehicle is available at their disposal.

The most suitable time to visit Surat is during the months of October to March. The weather conditions of Surat are like that of any other city in the western region of India. The summer season here is warm, can get extremely hot and the temperature can shoot up to 40-45 degrees centigrade.

Jaipur To Surat Round Trip Taxi

Why should we go with car on rentals for Jaipur To Surat by car book?

When you rent a car from Jaipur To Surat taxi services, we'll help you pick from a range of car rental options in Jaipur . Whether you're looking for budget cars, comfortable cars, large cars or a luxury car for your trip- we have it all.We also provide Tempo Travelers for large groups. Jaipur To Surat car hire,You can choose between an Indica, Sedan, Innova or luxury cars like Corolla or Mercedes depending on the duration of your trip and group size.