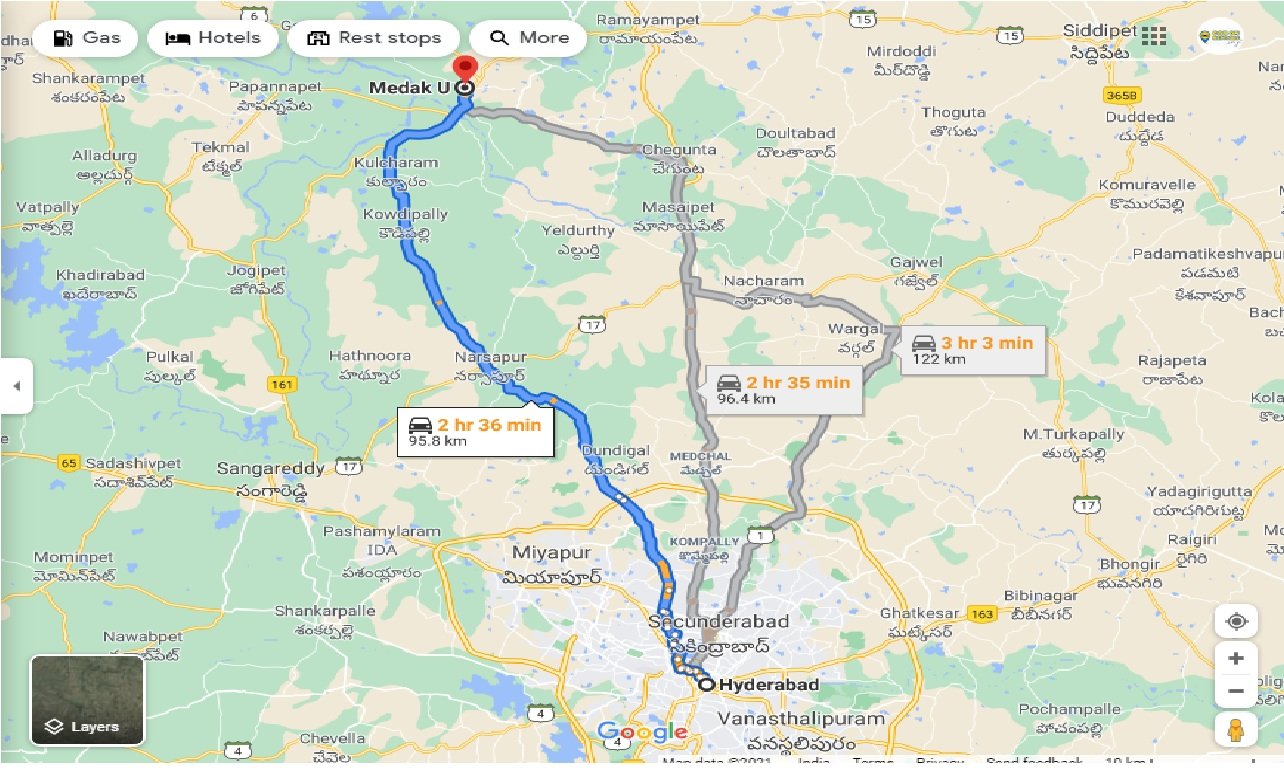 Hire Cab from Hyderabad To Medak Round Trip

Book Hyderabad To Medak cab, compare Car fares & check for online discounts & deals on Hyderabad To Medak taxi Service. Clean Cars, No Extra Charges. 8888807783. Hyderabad is the capital of southern India's Telangana state. A major center for the technology industry, it's home to many upscale restaurants and shops. Its historic sites include Golconda Fort, a former diamond-trading center that was once the Qutb Shahi dynastic capital. The Charminar, a 16th-century mosque whose 4 arches support towering minarets, is an old city landmark near the long-standing Laad Bazaar.

Medak district is a district located in the Indian state of Telangana. Medak is the district headquarters. The district shares boundaries with Sangareddy, Kamareddy, Siddipet and Medchal districts. Traces of Neolithic and Megalithic culture was found at Edithanur and Wargal village hillocks in the district. Rock paintings were found at Edithanur boulders and Hastallapur rocks.

Distance and time for travel between Hyderabad To Medak cab distance

Distance between Hyderabad To Medak is 81.5 km by Road along with an aerial distance. The Distance can be covered in about 02 hours 36 minutes by Hyderabad To Medak cab. Your Medak travel time may vary due to your bus speed, train speed or depending upon the vehicle you use.

Spots to Visit in Medak

When renting a car for rent car for Hyderabad To Medak, its best to book at least 1-2 weeks ahead so you can get the best prices for a quality service. Last minute rentals are always expensive and there is a high chance that service would be compromised as even the taxi provider is limited to whatever vehicle is available at their disposal.

Medak Weather in January-March: Warm and pleasant day time temperatures, coupled with right amount of dampness in the air makes this, the best time to visit Medak. The days are sunny, and the average temperature is 77â„‰ which is just perfect to put on those sneakers and go exploring Medak.

Hyderabad To Medak Round Trip Taxi

Why should we go with car on rentals for Hyderabad To Medak by car book?

When you rent a car from Hyderabad To Medak taxi services, we'll help you pick from a range of car rental options in Hyderabad . Whether you're looking for budget cars, comfortable cars, large cars or a luxury car for your trip- we have it all.We also provide Tempo Travelers for large groups. Hyderabad To Medak car hire,You can choose between an Indica, Sedan, Innova or luxury cars like Corolla or Mercedes depending on the duration of your trip and group size.